Yasir builds a Gazebo which Baber turns into an archelogical excavation. Rayyan helps Amaar to plan "Islamapalooza" (the youth day of the mosque) where no one turns up in the end because in his attempt to get people to come, Amaar infects them all with the cold he’s having. And Sarah wins 5000 dollars in the lottery, which upsets Rayyan as gambling is forbidden by Islam.

Mayor: When someone is more pious than you, there is only one thing you can do.
Sarah: Aspire to their level?
Mayor: Of course not. Drag her down to yours!

Like in Islam (and Christianity, by the way), gambling is no favourite in Judaism. As nobody expects to loose, winning money from someone is like stealing. Gambling is not considered a productive activity. There are opinions though that allow buying a lottery ticket or taking part in lottery-like activities for charity, the reason being that you fully expect to loose the money, but you loose gladly as you know the money goes to a good cause (Aish on Gambling).

So is someone who buys lots of lottery tickets a bad Jew? Well, maybe some would see it that way, but I guess there are many more important things to consider.

The main story is about Amaar getting his own (horrible!) TV show and Sarah and Yassir going crazy about it. The more interesting story for me is teenage Layla who’s subtle blond streaks turn out to be not so subtle. To cover everything up, she decides to wear the hijab whenever she is around her father Baber. Who of course feels that something is off and (after utterly embarrassing her in front of her classmates) in the end find out.

Baber: How will anyone know that you’re finally embracing your modesty unless we show you off, uh?

Poor Layla is the only Muslim girl in her class. And her father is not making it easy for her to fit in. In one episode she wanted to participate in a marathon or something for charity and of course he wasn’t too happy (in the end he agreed). In another he throws out a male study partner. For a long time he wanted her to wear the hijab, but she didn’t want to.

It is not easy as a child or teenager to be different. When it’s always you who is been singled out. By eating different food, not being allowed to go on tours or participating in some activities, even if it only is that the rest of the class goes to the same church on Sundays and you are the only one left out. I can definitely understand not wanting to wear something that would mark you instantly. Even if in a small town like Mercy with a rather small school, most students probably know that she is a Muslim anyway. But how far to you want to go publicize the fact? Yes, of course, Layla should be proud of her faith, but which teenager really is? I think her conflict is very realistic.

Turning to the other question, is it ethical to pretend to be covering your hair while you don’t really? Basically, can you lie because you are afraid of being punished? I don’t think so. While Judaism recognizes that there are some situation where you can lie (e.g., to avoid insulting someone aka "no, you don’t look fat", to save your life or that of someone else), I don’t think not getting punished is sufficient for a reason. Not even if the lie makes someone happy.

If you are reading transliterated Hebrew words or foreign names transliterated to Hebrew the results are often incomprehensible, sometimes hilarious and pretty much always very inconsistent. The Times of Israel now has an article (Wanted: A legion of proofreaders) about errors in Israeli street names in all languages which features this picture where all three languages on the sign are misspelled:

If you understand German, watch this cute video made by the foreign correspondent for German television in Israel, Richard C Schneider, about the challenges of finding your way in Israel using English spellings:

Seriously, who makes these signs? How can you sometimes get it wrong and sometimes right?

There’s a woman in Mercy who wears a veil (so that only her eyes are visible) and the whole town is in uproar. Sarah tries to find a law forbidding the veil while Rayyan ends up in jail for covering her face.

Head scarves and burqas have made it into the headlines in several Western countries several times these past years. Usually in the context of forbidding them. But first, let’s clarify what we are talking about: 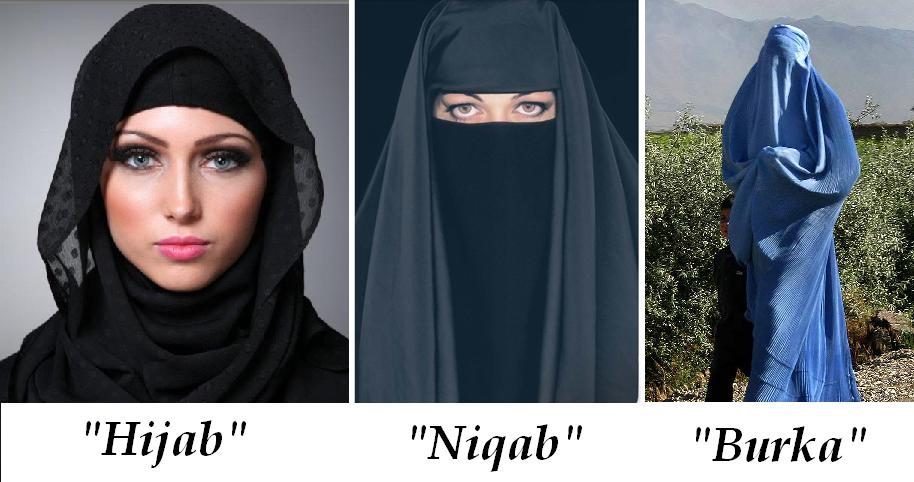 So what the lady in the episode is wearing is not a burqa, it is a niqab. Just because using the wrong words for things is annoying.

Judaism has some modesty rules that are in some parts pretty similar to Islam. I think the mainstream orthodox guidelines are that knees, elbows, collarbones and everything in between should be covered in something that is not too tight or flashy. Discussion will of course begin at this point whatever covered, tight and flashy means, but I think most people will agree that these are the general guidelines. I think Islam is a bit more strict here with the limits being the ankles and wrists, at least that’s what my colleague told me.

Head covering for women does exists in Judaism, but only for married women. Islam makes no such distinction. Islam also requires the ears and neck to be covered, Judaism doesn’t. Most Jewish women are ok with some hair showing (e.g., bangs), I have never seen a Muslim woman show any hair. There is no mainstream Jewish stream that encourages the covering of the face. There are a few ladies in Jerusalem who wear something similar to a burqa, but if you ask most Jews, even orthodox Jews, they’d tell you they are crazy. But there seems to be a trend towards more strict modesty rules, so we’ll see where we end up in a few years time.

In the episode Rayyan gets taken prisoner because she fights for the right to wear a veil. Would Jewish women go to prison before taking off their head covering? I believe some would. Fortunately the choice mostly doesn’t present itself, as according to most authorities it is permissible to cover your own hair with somebody else’s, i.e., wear a wig. This allows orthodox Jewish women to follow the halacha (religious law) to cover their head and still seem "normal" in the eyes of the larger society. It may seem really strange to wear a wig, especially if it is a beautiful one. But if you accept that the main thing is that the woman’s own hair should only be seen by her husband, a wig fulfils that purpose as well as any other head covering.

Last question, is it modest to go to extreme lengths to be modest, especially if you are the only one in town to do that? I don’t know. Somehow I don’t think so, but who am I to judge what’s "extreme" when I’m running around in a long skirt and tichel (head scarf) – the only one in town?

Baber and Yasir want to make some money by getting people to buy graves in their new Muslim section on the graveyard. In the B-plot, Sarah makes a mess out of community announcements.

Fatima: A Muslim likes to be buried with other Muslims. On his right side.
Fred: What, is it better for your back?

Burials are a big topic. Everybody wants to be buried in the right part of the cemetery and having control over who gets to be buried there is a huge instrument of power. The rabbi in my community managed several times to get everybody to fight over the question of who gets to be buried where. Personally, I’m probably too young to understand the importance, but I get that there’s a whole lot of politics involved.

So, apart from being in the correct section of the right graveyard, what else is there? First, burial is the way to go, cremation is frowned upon in Judaism, just like in Islam. Muslims are buried facing Mecca, Jewish graves do not necessarily face Jerusalem, but many people choose to get buried in the land of Israel or get some earth from Israel to be put in their graves. There is a tradition (no idea about the source) that the dead in Israel will be the first to rise and another one that when the Messiah comes all the dead will dig through the earth until they reach Israel – so you save yourself a lot of trouble if you are buried there! I’m not aware of any rule that says you have to be buried in a specific position, but all parts of a person should be buried. So this is why there’s an organization in Israel that goes to a lot of trouble to retrieve all body parts from the victims of terror attacks. But you are allowed to donate organs under certain conditions (see this post).

That’s I know about graveyards and burials, sorry it isn’t much.